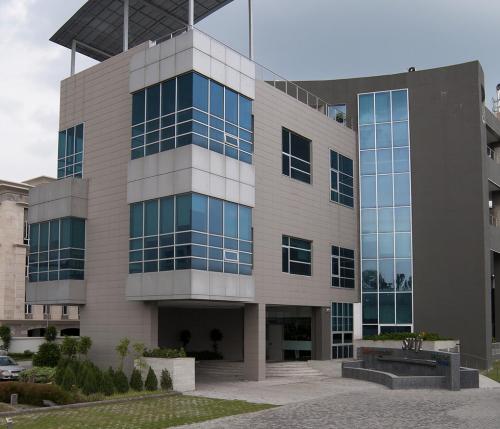 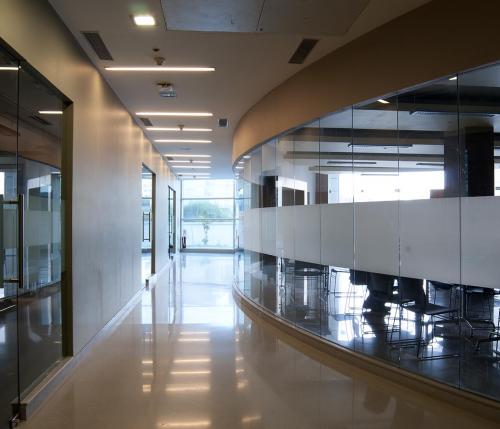 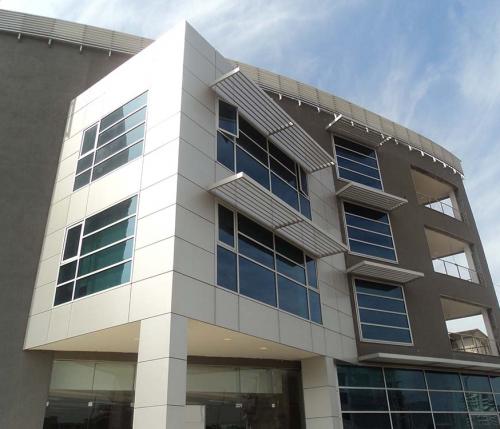 Sufi IT Park, Virsa, Chandigarh
The conceptual process for the design of the SUFI IT Park (StartUp Firms IT Incubator) aims to create an integrated unified composition through the articulation of the different form components, understanding the building as a volume and not as independent facades. That intention leads to a composition of added regular elements, represented by the cantilevered verandas, tied up together by the large parapet crowning the entire complex. Beyond this aesthetical function, this frame gives protection and privacy to the users from the other surrounding buildings and from the strength of the undesirable sun. The Sufi building is set on a South-North orientation- Massive volumes of the staircases anchor the whole, and the various elements. The modern glass and stucco insulated faēade is at the same time avant-garde in its expression and fits into the industrial surroundings. The design, which displays no symbolic elements on its monumental facades, stands in purposeful contrast to the local Indian traditions; preferring to integrate active and passive technology over decorative articulation.
Sufi is located in the new Rajeev Gandhi IT Park, on the border of Chandigarh and Panchkula. Prevailing winds are from the North and the North East where the best views are towards the mountains. The plot is oriented North South, Entry from the South. It is a zero drain site. The nearest transit point is4 km away, and bus services are available 500m away. Shuttle service is available. Amenities Hospitals, Food entertainment available 300 m away.

Entry and exit is from the front allowing for the creation of an "island" form set in greenery. Combining circular, triangular, cubical forms the plan makes a play on the possibilities of discovering unique geometries to shape Interior spaces. This offers a form that has a number of local variations and spatial formations that are new to resolve. The result is a dynamic low-cost design, with the added symbolism of color—green for the ground, blue for the sky, etc. in order to visually tie the building to its environment and location.
The glass in the curtain wall, works as a negative in the contrast between the filled and unfilled surfaces of the composition of folded panels and volumes. Idealized spatial layouts are arrived at that focus on optimizing the pursued characteristics of the three zones of use – Offices, Meetings and Work halls. The intent was to open the Office areas to the contact with the street and the views of the surroundings and locating the rooms in the rear area, much quieter and facing the morning sun. The Meeting zones are located in the middle, articulating those other two zones. The interior design does away with any historic references and stays away from “superficially” incorporating a traditional aesthetic, without allowing said traditional elements to be functional. Although the design incorporates porches and verandahs, which conventionally provide a sheltered, interstitial space between the pedestrian and the city, the facades have two entries set apart from the street level, enabling private access.
The Plan form has evolved due to the unique requirements of a multi user/ single owner Incubator, with meeting and office areas stacked over each other and larger open-plan work floors (including an extra floor plate) in the more private work zones. The ground floor plan is utilized for public functions – training, cafeteria, meeting spaces and demonstration rooms. Thereafter, the Planform is also shaped by the Sun and Movement Patterns; the West and South facades have deep shaded balcony spaces providing graded light penetration to the workspaces during the summer months and during winter months - an outdoor sunlit, interactive / Huddle space.
The building shell has recesses and offsets that are made possible by a complex geometry of conjoined cylinders and cuboids. The recesses and overhangs formed are used to shade- the interior volumes to look to the outside where small landscaped spaces and perimeter trees are placed at transitions and pauses in the movement sequence within the building. The resultant floor plan is articulated with the qualities of a street/path, with gradations of spatial and interactive (open and naturally lit) spaces, creating congregation spaces and places of work.
Additional climatic features and technology interventions for the building utilities design are included to achieve a sustainable building performance. In keeping out the hot sun, many Indian buildings complain that office spaces are dark and claustrophobic. At SUFI, the openness of the social areas and the integration between outdoors and indoors were an important concern; this was realized through the resolution of the architectonic forms, and to the detailing of the doors of the facade that hide completely behind a providential wall with their trail inlaid in the floor, free of unevenness between interior and exterior. The idea is to offer diverse experiences while moving through the building, of graded light and shaded spaces, landscape variations, made at all pauses and transitions. The projected forms relieve the bulk of the built and supply natural light to the floor plates within.
Passive solar systems are integrated into the design with insulated walls, insulated glazing systems and Sun-shading Louvers on Curtain Glass Facades. Technology is utilized to maximize energy efficiency using Chilled beam convective air-conditioning, with Treated fresh air units addressing issues of stale air in the work spaces. Jet fans are used for ventilation of basements reducing energy requirements. LED lighting and high efficiency light fixtures providing glare free lighting at the worktable, with day light/ occupancy based sensors allowing zoned control and Two Way Reflected Lighting in the offices. Even though the building is not formally certified as environmentally green, Yet, inherently due to passionate contribution by the owners/architects and engineering designers, this project resulted in 28 % energy savings on the ASHRAE base case- Be it chilled beams, enthalpy recovery OR external shading OR efficient light fixtures etc. The floor to floor height of the building was reduced, as large ducts were eliminated, thereby reducing the capital cost on the structure, fenestrations and finishing. This also reduces the external heat gain, and thereby the operating costs. Energy performance of the building was evaluated after completion, and the results demonstrated a 28 % energy saving on the base case, without much struggle and investments.
Visual interconnections & interpenetration of interior spaces are made through shaded balconies & glazing attached to corridors, and lobbies emphasizing the interplay of light with a pleasing pastel palette of colour and material finishes- SS finish/ grey/ blue tint glazing/ natural aluminum. 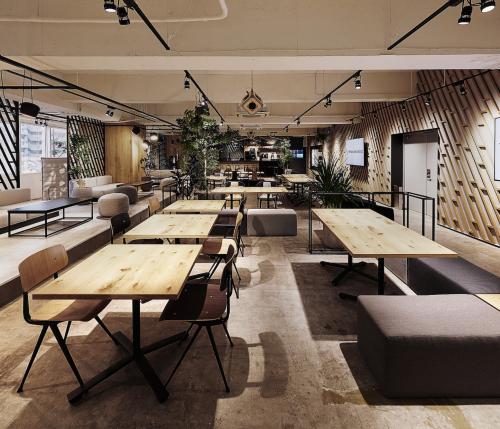 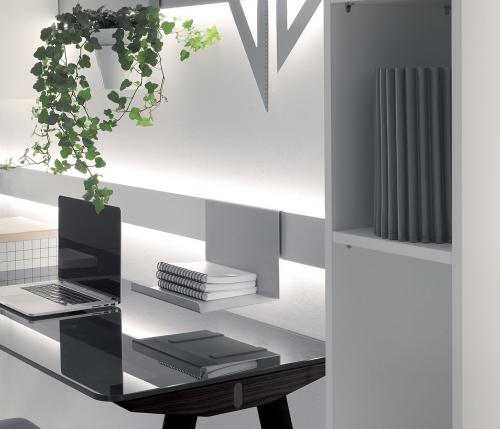 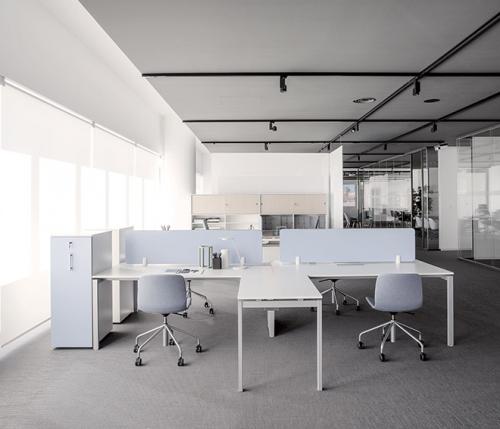 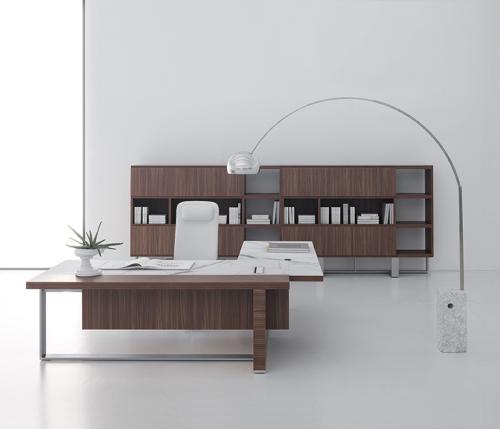 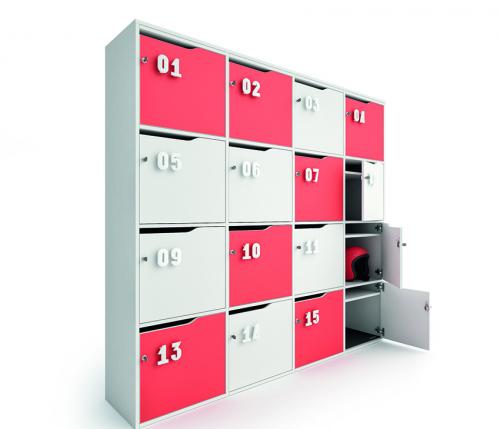